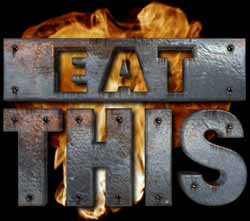 EatThis is a side-scrolling "shoot 'em up" game.
It was created by Didier Dambrin, the lead developer of FL Studio

a smashing CD-audio soundtrack but above all : great playability.

Here is the Storyline

You're Leon, driving home to the city of New York unaware of the danger overhead.

While the city goes to bed, aliens are unloading their gear. Tons of highly explosive

stuff, destroying half of the city on their way, with no respect for our bricks,

our cars, our statues, our monuments, our well-being!

Leon is the right guy to do something about it. He is determent to kill every single

alien on earth, and blast them back into space.

Are you man enough to enter this game ?

- Smash all different aliens, each having their own unique game play features

Some misunderstandings about Eat This:

A wide spread misunderstanding is that the sound engine of Eat This was the basis for our later FL Studio music software.

The first Fruityloops program used MIDI only, while Eat This did not use MIDI files, but WAV files for its audio.
Although both programs share the same lead programmer, Didier Dambrin, the Eat This sound engine was not created by Image-Line, but licensed from a 3rd party supplier.

Eat This is a 16bit program. This program will run fine under Windows 95/98
For other Windows versions, you might need some extra work like getting extra files or using a virtual machine.

Is it possible to install and run Eat This on Windows 7?
possible option here:

To install the game:

To run the game:

This is a playlist combination of some animated cut scenes and the actual game play.
Click a video from the bar below to switch to a different video.


The kill granny's version never made it to the actual released game.In Eat This the granny's were exchaged for aliens.