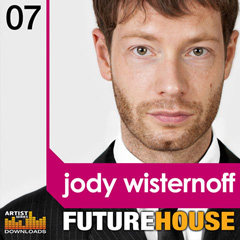 A fresh set of sounds.

Jody Wisternoff - “Future House is a fresh collection of Dance samples from one of the pioneers of the UK House and breaks scene, which offers a diverse and extremely inspirational set of Future House samples which have been expertly crafted with the dance floor in mind; and which will be hugely useable to modern producers working in House, Techno, Electro, Breaks and Minimal music styles.

Jody Wisternoff’s influence and contribution to dance music cannot be overstated. Between breaking through to the DMC Hip Hop finals as a fresh faced 13 year old in 1986, and putting the finishing touches to his band’s fourth studio album in 2008 a lot has happened. His early 90’s act Sub Love were one of the largest draws on the UK Rave festival circuit and his hook up with Bristol dj Nick Warren in 1994 gave us the hugely successful Way Out West.

Within this expertly crafted collection of sounds and samples you will find over 740 wav samples.

Jody’s reason for doing this sample collection for Loopmasters was that he wanted to present to other producers a very usable collection of loops and samples that he hopes would be inspiring to anyone making contemporary house music and that they present as broad a scope of styles as he has been lucky enough to be involved with himself.

If you are looking for a fresh set of sounds from one of the most respected producers in the genres of House, Breaks and Electro music - check out the Future House collection from Loopmasters and Jody Wisternoff, set to be a future classic.