Image-Line is a Belgium based software company, founded in 1994. If you thought Belgium was all Beer and Chocolates, then you may be surprised to learn Belgium is also the home of one of the worlds most successful music production applications FL STUDIO. 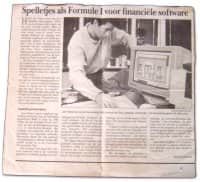 The first thing they developed was a Tetris game clone and offered it on floppy disks in the 'little ads' section of Computer Magazine. Surprisingly, the game caught on and people asked for more. JMC writes: "This was the time CD-ROM games like 'The 7th Guest' started to appear and we decided to do a CD-ROM and teamed with 'Private', one of the bigger players in the over-18 games market. We released a whole bunch of our CD ROMs including 'Private Prison' and 'Private Castle''.

Around the same time, IBM held a "Da Vinci" contest where 1st prize included color laptops (which cost about $8000 back then). As we didn't have a lot of cash to spare we reworked an existing game, mailed it in and won 1st prize in the multimedia category. The most important part wasn't the win, but the fact we met a 19 year old developer called Didier Dambrin (known as Gol by our customers).

Didier not only won 1st prize in the 'Game' category but the overall 'Grand prize' too. A trip to the US. We immediately saw his talent and convinced him to come and work for us. Gol's first game for us was Private Investigator. It was a little gruesome then but mild by today's standards, caused the rapper Ice-T to shout: "This game beats drugs!"... after playing if for like half an hour on our booth at a show in Las Vegas.

We decided to use Gol's talent for something better and asked him to develop a platform game, Eat This. Sadly, this was the same time that games were all going 3D and so it went unnoticed. You can check out a 'Speed Run' here on YouTube. The game really shows off Gol's coding and visual skills (remembering this was made in 1998).

The rest of our developers continued on our other products like Fact2000 (invoicing software), E-OfficeDirect (a content-based web tool that was the precursor of EZGenerator). We even topped the Belgian game charts 4 years in a row with the CD version of a popular Belgian TV show called Blokken (a game based on Tetris).

From Games to Music 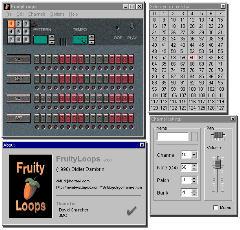 Meanwhile, Gol was being drawn into the music scene by applications such as Hammerhead and Rebirth 338. He had the idea of merging both into a step sequencer, so he started developing FruityLoops. When he dropped it on our machines it was a simple, MIDI-only step sequencer that we were having trouble placing in our existing product range, leaving us scratching our heads how to market it.

This turned out not to be a problem as people went WILD about it and sucked our servers dry (downloading the demo) a few days after launch. It was also around this time we came up with the idea of Lifetime Free Updates for the program, that existing customers should get the latest version of the software for free.

The first couple of years were pretty tough as there were hardly any sales and we had to beg people to host the Fruityloops demo on their servers (thanks Maz!). To generate some additional income, Gol developed an EJay type program called FruityTracks that was "OEMed" for Mattel into Pro-DJ (for France & UK) and Radio 538 Music Machine (for Holland & Belgium). During this time FruityLoops slowly grew from a simple midi drum machine into the fully featured virtual studio that a wide range of musicians are using today.

After producing FruityLoops for about four years we changed the name to FL Studio, here's why:

Since we changed the name we started to be taken more seriously and customers are happy to tell people what application they are using to make music. The FL Studio trial is now downloaded over 30,000 times PER DAY and is used by some of the biggest names in the industry. We have definitely come a long way thanks to our customers support.