Unique pack of presets for Harmor, making use of its audio resynthesis function. It is one of the fastest and easiest ways to add repitchable vocals to any of your projects.
39 USD
ADD TO CART 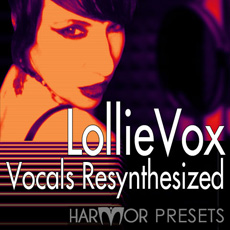 Play 95 four bar vocal phrases, sung by LollieVox, in real time on your keyboard or from the Piano roll, in whatever pitch, chords or tempo you like.
The acclaimed Harmor synthesis and FX engine is at your disposal to manipulate the vocals in ways not possible with conventional sample playback or pitch editing.
Playing different notes will not increase or decrease the speed of the phrases or create the 'chipmunk effect', as the formant is automatically corrected, unless you want it to.
The phrases automatically sync to your project tempo and bar time or can be set to restart on each note. Use per note X and Y modulation in the FL Studio Piano roll to control phrase start position or formant shifting of individual notes in a pattern.
Lower the formant to create masculine vocals or raise it to make them sound like a child.
Apply custom vibrato at any time by automating the depth and speed parameters.
Drag and drop any of the 95 pitch flattened source vocal samples on to 25 special Harmor presets. These include other playable effects, such as robotic vocoding, sustained pad sounds or mutated formants, giving 2375 possible combinations.

Note that these presets can only be used in the registered Harmor Plugin.

How to use Resynthesized Vocal Packs