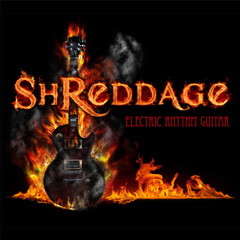 Shreddage is a DI guitar sample library like no other. Rather than trying to cover every possible technique or style, it is focused entirely on rhythm playing in a rock/metal style. The result of this intense design focus (and two full years of research and development) is an extremely playable and realistic instrument. This library isn't just for composers, though it is very easy to use in the context of trailer cues, video game arrangements and other massive productions. It's also a great tool for producers and even guitarists!

Shreddage requires next to no editing or humanization to sound realistic right out of the box, and thus can be dropped in a track to fill it out, doubling a real guitarist or serving as a highly-accurate placeholder or demo until live guitars are recorded. The Directwave patches are mapped to just load and play - each hand gets a different type of articulation, and velocities handle the rest.

Just load up the master patch and prepare to have your face melted. For years we've read that it's simply not possible to have realistic guitar samples without loops. We're confident that with this library, we've proved the doubters wrong!